March 2013 – Paul Beckwith stated – “For the record; I do not think that any sea ice will survive this summer. An event unprecedented in human history is today, this very moment, transpiring in the Arctic Ocean”

In 2015 – The amount of sea ice in the Arctic is essentially identical to 20 years ago.
Comparison of same May date, 20 years apart 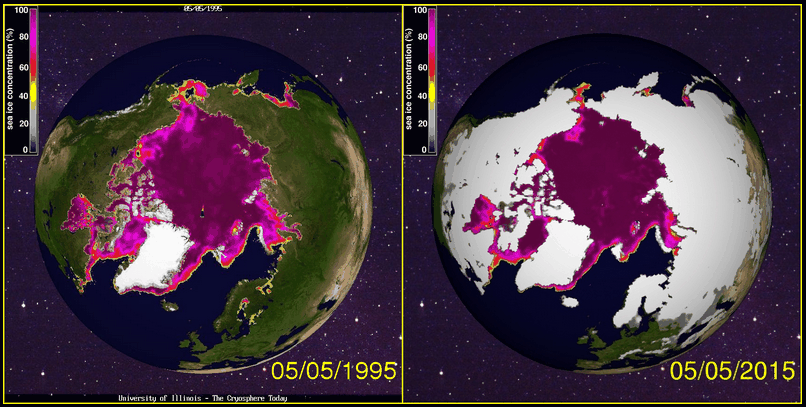 Also look at the amount of snow cover in May 2015 – the so called ‘hottest year heifer’ !! 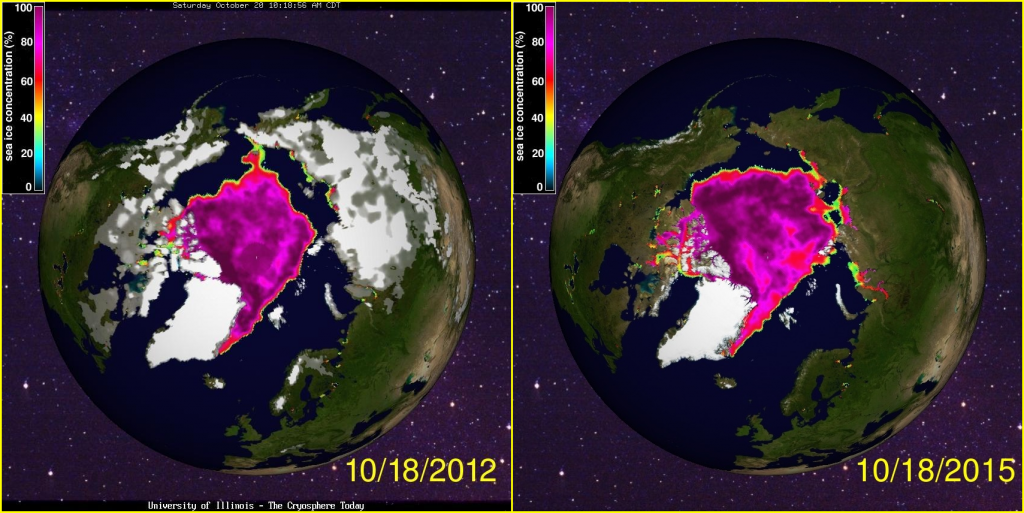 From: University of Illinois department of atmospheric science http://igloo.atmos.uiuc.edu/

Ice at the North Pole may disappear completely within the next few months for the first time in 20,000 years. “There is supposed to be ice at the North Pole – not water,” said Mark Serreze of the US National Snow and Ice Data Centre (NSIDC) in Colorado. “The Centre has been predicting that the Arctic Ocean could be virtually ice-free by 2012 but that point may be reached within months rather than years.” The Telegraph, (UK) 27 Jun 2008

Yet in 1958… the first submarine surfaced in clear water at the North Pole.
They couldn’t have done that in 2015 because of… to much ice !!

2008 NASAs James Hansen, said “models predict that in five to 10 years, the Arctic will be free of sea ice in the summer.”

The models are a muddle !!
2015 Arctic sea ice had one of its shortest summer melt seasons on record (160 days), & saw record autumnal re-growth; Arctic sea ice thickness was up 40% over the previous four years.

We are told constantly that Arctic Sea Ice area is falling, BUT… Source: http://ocean.dmi.dk/arctic/icecover.uk.php the page on this site updates daily.

The features of this graph which make it more meaningful than the graphs from NSIDC and other sources are: In 2014 an M4.5 earthquake was associated with a geographically extensive release of methane into the atmosphere; this indicates a large number of sub-sea hydrothermal vents across the Arctic Ocean. CO2 as well as methane & hot water issue from these vents, (coincidentally well-developed and extensive Phytoplankton blooms have been discovered under the ice in the same area). http://tinyurl.com/lawq2kn